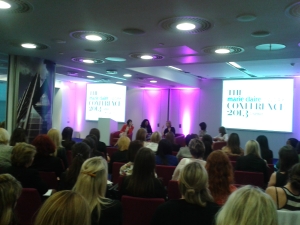 Mixing things up a bit, I decided to participate in the first Marie Claire @ Work conference at RBS, Bishopsgate, London on Friday 10 May 2013.

I hope that Marie Claire decide to make this type of event a regular occurrence. The day’s sessions were not just aimed at people interested in setting up their own business (although I did meet other delegates who were at various stages of starting their own companies/going self-employed) and I found a lot of the business advice relevant to other contexts.  The networking opportunities were excellent (sessions were well spaced out and there was a closing reception, giving everyone a chance to mingle) and a range of sectors were represented. I had a number of really interesting conversations with people which were great both in giving me an insight/different perspective into workplace attitudes/situations but also for giving me ideas re: academic/business connections and crossovers … All in all, good stuff! 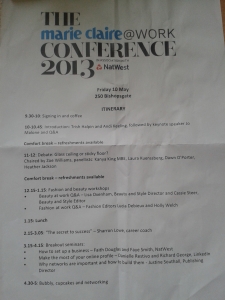 As you can see, the conference had a pretty varied mix of sessions. Unfortunately I missed Jo Malone’s keynote, arriving part-way through the panel on “Glass ceilings: Sticky Floors” facilitated by Zoe Williams. Panelists discussed the need for preparation, self-criticism, resilience and openness. In relation to the latter, the importance of recognising that you may not be the best placed person to do everything you need to move forward (e.g. with your business plans) was stressed: don’t be afraid of seeking help from others who have the skills and knowledge that you do not.

Here my notes get a bit sketchy. However, what was particularly interesting (most notably in the Q&A) was the general sense I had from the panel that women’s lack of self-belief and confidence was actually a more pressing issue to address than any perceived “glass ceiling.”   Whilst self-doubt appeared to strike a chord with both panel and audience members alike (and there is a need to examine the origin of this and do more to address it) focusing on the individual diminishes the fact that sexism, stereotyping and discrimination continue to be a part of many women’s lives, both inside and outside of the workplace.

Moreover, whilst legislation or changes to workplace policy at least acknowledges that there is inequality and “glass ceilings”, such measures do not (unfortunately) eradicate inequality. This year’s Fawcett Society report “Women’s Equality in the UK”, for example, makes it clear that there is so much more to be done in terms of bringing about equality (see p12 in particular). Indeed, a few years ago the Guardian reported that 40 years since the Equal Pay Act came into force, there still exists a “yawning chasm” between men and women’s pay.

Maybe it’s just me, and maybe it’s too big an ask for one panel session, but I would like to have had more analysis and discussion focused around why women still encounter sexism and stereotyping in the workplace (indeed during the Q&A somebody gave several examples of sexist attitudes/behaviour they had encountered), what the possible causes of women’s low self-esteem are (as this issue was brought up a number of times) and perhaps heard people’s opinions on how we can work together to address these issues. Any examination of women in the workplace and the barriers we face should not be primarily focused on our own perceived “faults” as the reason why we cannot progress/be taken seriously: the situation is much more complex…

Yet (perhaps ironically?) the post-lunch speaker success coach Sharron Lowe was a highlight of my day. Sharron is a very dynamic and inspirational speaker who works with luxury brands and major companies. She also supports and works with young women at Centrepoint. As on her website: “She takes Good and makes it Great and takes Great and makes it Phenomenal!”

Sharron took us through 10 steps to success and asked us to “make it personal” so that we could apply these to our own needs. I’ve paraphrased/quoted these below with some additional comments and thoughts. As is often the case, notes in no way do a speaker justice so if you have the chance to see her speak… Go!

1) The importance of attitude. As Sharron noted “Is yours worth catching?”  Key to Sharron’s thoughts on this issue was the need to constantly challenge our own thoughts, motives and feelings in order to change them.  From my own experience, this is definitely the case. To change one’s thought patterns and attitude(s) usually takes time and effort, e.g. is a process rather than a “flick-of-the-switch” moment. By working toward a more positive mental attitude you can ensure that your attitude as a “self-fulfilling prophesy” is more positive than the one you had previously. Which leads to…

2) “Consciously think positive thoughts.” Changing your mental record is going to take time, therefore you will need to explicitly take the time and invest effort into questioning assumptions and old habitual thought patterns and replacing them with a different take on the situation.

3) To “think outside the box” you “gotta come out to get back in” as Sharron put it.  As in the “glass ceiling” debate, where it was highlighted in the Q&A how useful new employees perspectives on a company’s practice are, a fresh pair of eyes and different viewpoints are always good for scoping out options for what to do next, or for helping one think differently. It needn’t even mean asking another person but just taking a step back. Be open, not closed, minded!

4)  You never fail at anything, as you can always learn from an experience that doesn’t work out as planned. It’s OK for something not to work. Just learn from it and move on.

5) Reject (or at least deflect!) negativity. I don’t really have any clarifying notes on this point. However, I’m guessing that it could be the case that some people are unaware of how their negative attitude is impacting on others or not be at the right point to think about addressing these habits. See (1)) and consequently…

6) Hang out with positive people. As Sharron pointed out, obviously this doesn’t involve ditching/avoiding negative friends and colleagues! However, it could mean that you change your response and conversation patterns.

7) “Live with gratitude”: in other words, look at what’s going well in your life and use this as a foundation for all you do.

8) Think about your key 5, “non-negotiable values.” These will help you by giving you a foundation for action: inspiring confidence whilst framing action.

9) “Perception or reality?” In other words, question what/how you are thinking about a particular situation. In some senses, this could be described as “taking a step back” to help facilitate (3).

10) Finally, Sharron urged us to write down personal goals. “Where do you want to be?” But additionally and crucially for Sharron: “Why do you want what you want?” What is motivating you?

Sharron has a holistic strategy to success and will be publishing a book shortly. I very much look forward to reading it, and in the meantime hope to have further opportunities to see her speak!

Prior to lunch the Marie Claire team switched between rooms to give beauty and fashion advice. The final switch around session comprised of quick presentations from the Natwest Business team on starting a business, the LinkedIn team on improving your profile and the editor of Marie Claire on networking. There were definitely some useful tips here but I might post these at a later date (currently, as you can see, this post has been lingering for a while in my “draft” folder!)

You can see the official post-conference post from Marie Claire here and view pictures and video here.

Once Upon A Time…